Indy Press Review
We Can Be Reached at this addy: indypressreview@yahoo.com 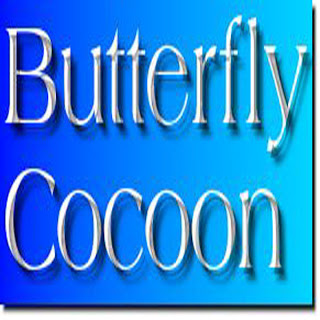 It is a dying art form.

It started with Robert Cole and wound its way through Percy Gregg, C. I. Defontenay, E. E. Smith, Edmond Hamilton and finally culminated ( some people's opinion) in Star Wars.

We speak of interplanetary intrigue. We speak of.....SPACE OPERA,

Now Butterfly Cocoon isn't on the sweeping scale of the aforementioned, but...

In this day and age there are few writers who keep space in science fiction.

Something we still believe to be the purest form of the genre.

As the olde maps say, "Here there be spoilers." We have no sympathy if you hit one for we've given you the chance to read it.

Robert Moriyama, Aphelion's Short Story Editor, had this to say when we inquired about Butterfly Cocoon:

"The story was chosen for a number of reasons, including the clear, matter-of-fact style of the opening paragraphs -- the author establishes both the essentials of the setting (a remote space colony) and the character of the protagonist (a bored veteran of an interplanetary police force) in a way that feels natural.

Of course, the assertion that the outpost was a place where "nothing ...happened" raises the expectation that something is /about/ to happen...

The disappearance of several people (with unidentifiable ashy residue left behind) places the story in the "locked room mystery" category (although the "room" is a very large one); the solution to the mystery, however, is distinctly in the realm of science fiction.

The reaction of the protagonist when she learns the truth is both funny and consistent with her established background, and provides a satisfying conclusion to the tale."

And with that having been said, all we can say is he took the words right out of our mouths. Since he did let's see if we can get a couple more...from the author if we might...

Review: Your story is science fiction. Of a type not that often seen anymore. Space. Where did you get the inspiration for it and are you influenced by the golden age classics in any way?

A. R. Norris: Inspiration for this story...I was watching a History Channel special on religion. They were covering the reasons you would be excluded entrance into heaven, based on the rules. It sparked a mental wave. What if an alien species sought out and collected those exiled souls? Maybe of an abstract variety, who absorbed them into a singular entity?

Review: Where does this story fall in your publishing "history?" First, last or somewhere in between?

A. R. Norris: Butterfly Cocoon is my first publication. It was the second short story I wrote since picking up the pen again last summer/fall, after a sixteen-year hiatus. I have dozens now and really enjoy the satisfaction short stories bring.

Review: If you were only allowed to read one author for the rest of your life, who would it be?

A. R. Norris: Isaac Asimov. Hands down. No debate.


Review: When you sit down to write what is the most annoying thing that can happen around you? (That is out of your control.)

A. R. Norris: The most annoying thing that could happen is everything becoming completely silent. Life is chaotic 99% of the time. If, for some odd reason, it gets quiet while I’m writing, my brain freezes up and I can’t think.

Review: Do you spend most of your time:

A. R. Norris: Most of my time is spent in my personal life. As a married mother with four aliens to raise and a full-time career, it’s priority. Of course, that doesn’t mean I stop the writing process. In many instances, it’s while living life that I find my greatest ideas. Like most writers, I see the world as a constant brainstorm.

Review: In Butterfly Cocoon, other than Marie, who is the most important character - in your mind - irrespective of plot development?

A. R. Norris: The comet. I still debate with myself whether Marie or the Comet should’ve been the main character of the story. The comet is enlightened and sure of its motives. Even with such sound characteristics, it is able to expand its awareness and knowledge with every interaction. What better character foundation could an author wish for?

Review: The story ends with, "Well, do you know how to fly a Boomerang?" Don sent her a cocky grin. "'Cause I sure in the hell don't." Did you have other ending lines, or just came up with a good one right off the bat?

A. R. Norris: Interesting question. I wish I could remember the initial ending line for you but it was lame. Matter of fact, the original ending itself was weak. After fixing it, I pushed the incident from memory (mine and my pc’s).

Review: This will give an in-sight into your character.. You are an editor. You receive a story. Let's say it starts like..

."They was burning. All of them. Some was smoking to. And all becase they didn't know how too stop droop and roll. The fireman hosed them down with water and it burned too. But it didn't smoke too much like the people. Just burnin away and smoking they was."

How would you word a rejection notice?

A. R. Norris: Oh, man! What a difficult job that must be, holding people’s dreams in your response. I’m going to take the fifth on this one.


Review: Can you remember the first book you read that made you think, "Wow, I have to try writing?"

A. R. Norris: 6th grade. English class reading list. I selected The Time Machine by H.G. Wells. I never thought the same way again. How could I? The man wove an interesting book showing the results of class hierarchy, social blindness, and industrial revolution. Of course, back then, I was just a 12-year-old girl suddenly traveling through time. From that day forward, all my dreaming revolved around space and science, and writing those thoughts down.

Review: Oh yes, almost forgot the question asked of all authors. Any words for the aspiring writer?

A. R. Norris: Boy, that’s a loaded question for a novice writer. Okay, I’ll give it a go. It takes many rejections to get published. Don’t let the industry wear down your thick-headed determination. As my mom would probably say, “Being stubborn as its advantages.”

Review: Most writers start off as closet writers. It takes a lot of trust to hand your words to another person to read. To whom did you first show your writing and was their response anything like you expected?

A. R. Norris: This actually has two parts for me. There’s the safe choice I made first, and the risky choice I made when I decided to seek publication.

My safe choice was my sister. She is my closest friend and major cheerleader. She’s the most wonderful and positive person to have in your corner. The risky choice was an online critique group. The reaction was far less traumatic then I expected. They provide a lot of positive encouragement and great feedback.

Review: Do you want to do a shout-out to anyone?

A. R. Norris: Hmmm...shout out? Okay, I’ll bite, but it’ll have to be a little cheesy. I have to give a shout out to my husband. We’ve been together sixteen years and no other person knows me better. He actually enjoys putting up with my weird and often times odd personality. No other man would sit on the first evening of our honeymoon and watch The Man Who Fell to Earth.

Review: Here's your chance to ask and answer the question we didn't ask, but should have.